Title: Honest Doubt AKA Inside the Music in a Box with a Flashlight.

2 names for the installation, intentional use of materials that look/sound unfinished, a small space to share with others filled with a plethora of images that can only be accessed in a dark environment with the limited scope of a flashlight, and cannot be avoided even by one's feet; all while music plays to over-stimulate the sense further.  Inside the Music in a box with a flashlight AKA Honest Doubt is my comment on the human confrontation with doubt which is an ancient trauma in the human spirit. Whether you believe it is caused by God or natural evolution, the awareness of being limited by mortality and its ensuing moral complexity associated with living is a horrendous quandry. My intent with this piece is to push awareness past the surfaces to the realization that doubt stems from acknowledgement of the lack of appreciation, but not a lack caused by intent rather a lack caused by "too much"...not enough time to appreciate it all. The trauma is caused by the prosperity of infinity....which mortal being are not obliged to ever fully appreciate and should feel relieved that the lack of appreciation is not their fault........transcends us past our own material prejudices because our awareness of our appreciation is caused by mortality, not a specific object or experience.----based upon the "invisible"--absence brought to life----......... 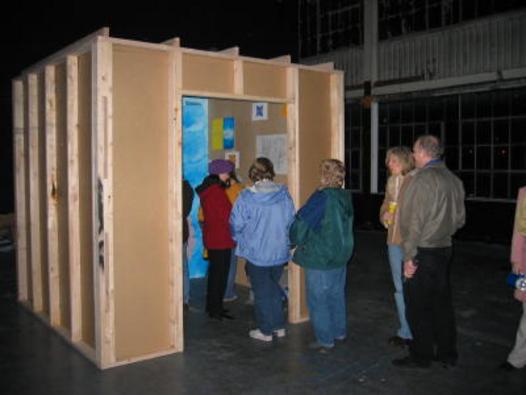 This page is still under construction.....

Live Sample of being Inside the Box